Hey, friends! I just got in from pruning my front flower bed that we put in this year (you can follow along on the progress on Instagram), and I can officially say that it feels like the Dog Days of Summer are here! We’ve also had a lot of rain, making our green babies grow and quadruple in size since we planted them a few months ago! It’s so hard to believe we’re in the thick of the Summer season – and in the middle of July for that matter. 4th of July has already passed us by and I will forever be amazed by how quickly time marches on. Before you know it, the flower bed will rest and reawaken in the Spring, the leaves will be golden, and a chill will fill the air. So let’s try to enjoy it while it’s here in our very own way, shall we?

But first (and speaking of time) – let’s all go on a quick little field trip and pile into my time machine (it’s a DeLorean, because that’s what all time machines look like. I’m positively sure you all will fit!) back to July 2017 when I took a trip to Mount Vernon with family!

At the entrance to Mount Vernon, you instantly feel transported and welcomed. My artistic eye loved the colors and details and we weren’t even at the main event yet! 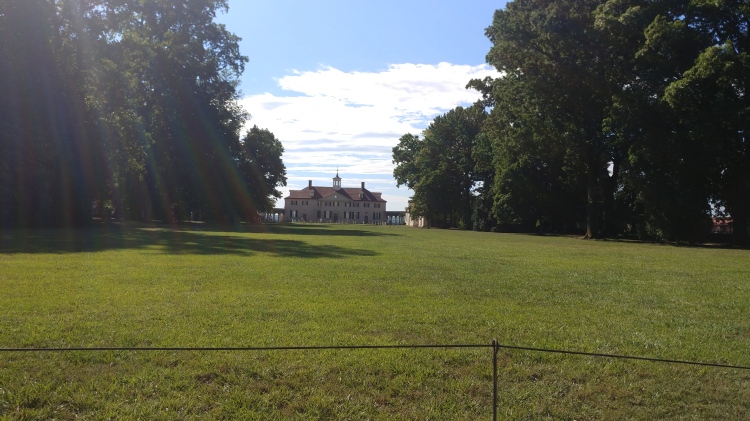 I’ve been to Mount Vernon a few times in my life and every time, standing here in this spot, I always love drinking in her magnificence and timeless beauty, feeling history begin to come alive around me! 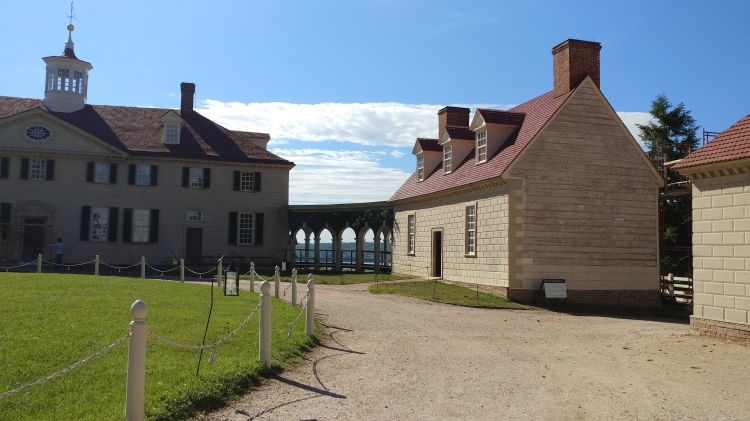 Around the back of the home we went, overlooking the Potomac River. We were waiting for everyone to gather before our special tour started in the basement! We had signed up for the National Treasure tour, based on the movie Book of Secrets. Oh boy, was I excited to experience that! Everything was calm around back, allowing me to get an almost tourist free picture of the home. What a view President Washington had! I wonder if he ever sat on the back porch in the Summer as the sunset while in deep contemplation over political matters. Or maybe He and Martha would relax, enjoy each others company here after a long day. If I had a real working time machine, I’d love to go back and observe them in their everyday lives! Something “cool” we learned on the tour was that they would chip away ice from the Potomac and store it in the ice house reserving it for things like making ice cream. My sister-in-law made an excellent point when we learned that – we’ve never seen the Potomac freeze over enough to chip away ice! That may be a testament to how much warmer it is in our modern day. 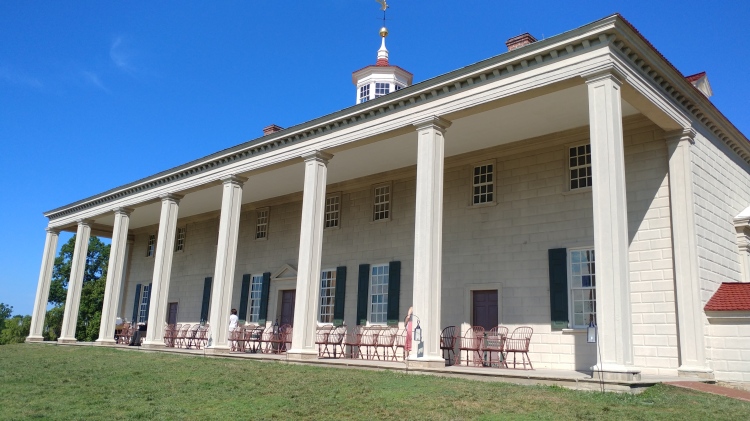 The picture above probably looks like it’s a picture of nothing. But after we were done touring the basement and waiting to move on to the next location of the tour, I looked up and saw these bells on the side of the house on the second story. I wondered what they were for – communication with the servants, maybe? I’m not sure and didn’t get a chance to ask! So if you have any ideas, I’d love to hear!

After the National Treasure Tour, we were on our own for a while, trying to fill time before we toured the house. We walked down to the river, looped around, meandered, and then found ourselves at the Pioneer Farm! This was a portion of Mount Vernon I had never explored or heard of, but it was so neat to see and walk along the crops that were sprouting up! Back in Washington’s Day, hemp was a big crop along with wheat. He built a 16-sided barn for horses to trot around on top of the wheat, separating the seed from the straw (threshing the wheat, as it’s called). I’m not sure how I skipped taking a picture of the barn, but we got to stand in the middle while they brought in the horses for a demonstration and it was so neat to see the process! It was something Washington created to make threshing of the wheat quicker. 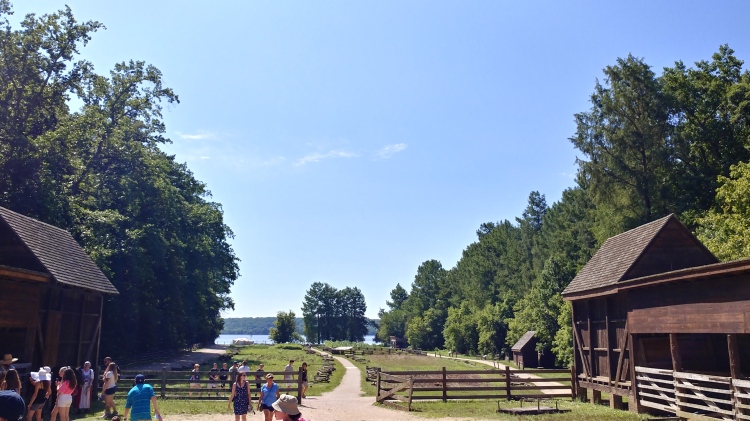 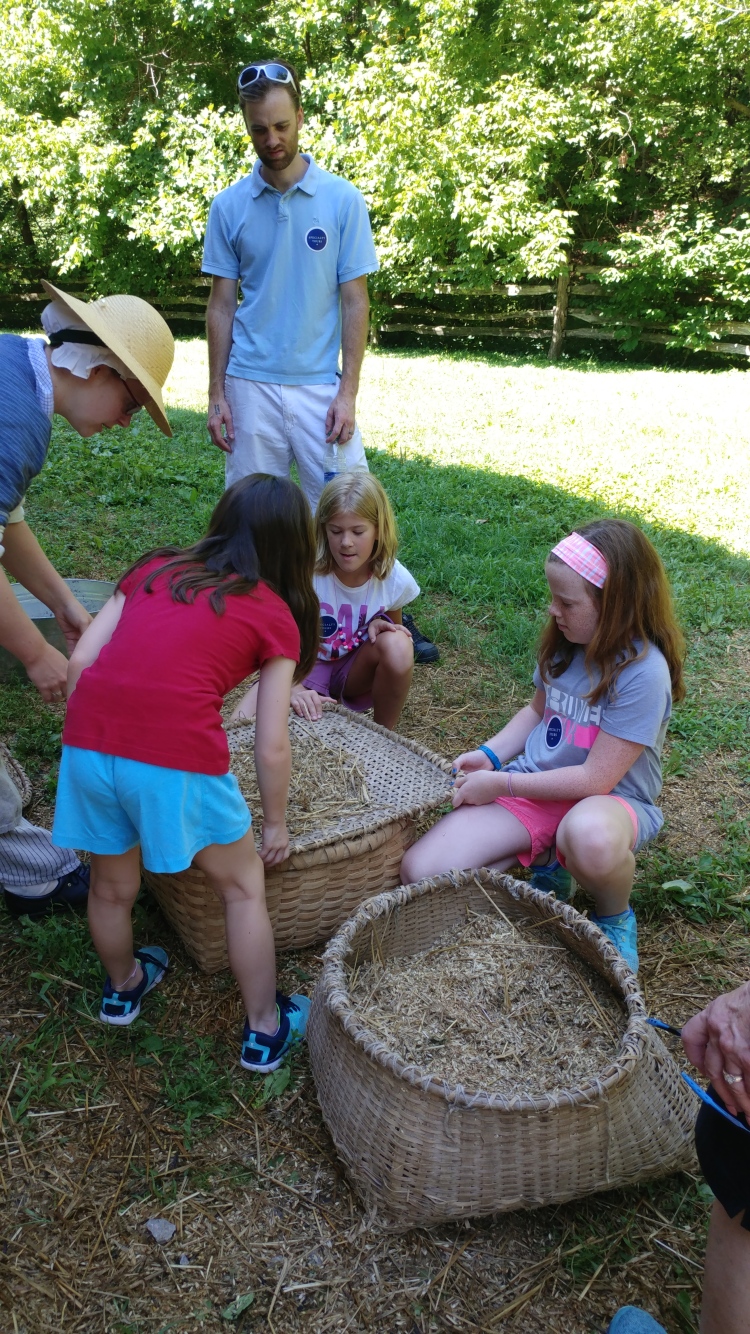 After the seeds were collected on the bottom of the barn, they would use baskets to further separate them from the stray pieces of hay, as my cute nieces are demonstrating! 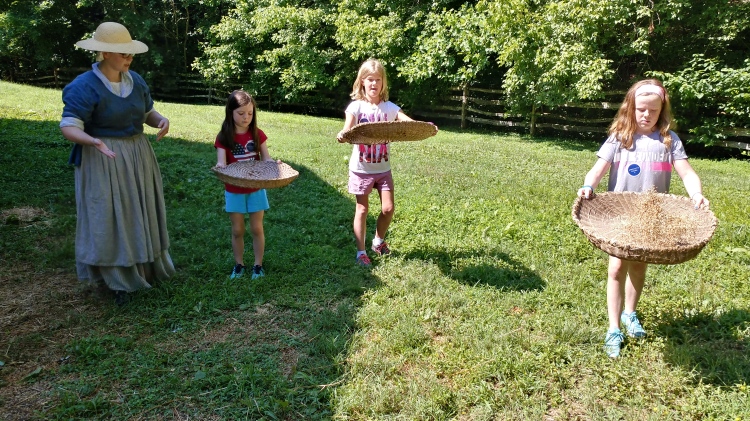 After the farm, we took a walk along a trail and got in line for the house tour. By this point in the day, the July heat was blazing hot and shade was a welcome treat!

We snaked our way through trees, slave quarters, a breezway overlooking the Potomac, and finally we were in the house! This is always an exciting moment, being ushered into the giant colorful dining room of President Washington! How many important and influential guests had sat at that table? Quickly, we were lead through the house, finally reaching President Washington’s bedroom, signaling the tour is nearly over. Across from the bedroom is a staircase leading the crowd back downstairs and through his study. As we wind around the banister, anytime I’ve always been there at Mount Vernon, I make a point to touch the banister as I go downstairs. Why? Because it’s an incredibly small connection of history in that moment. Imagining in the morning hours after he’s risen from sleep, like most people, he probably steadied himself with his hand on that banister before descending down to his study, where he prepared himself for his day. It’s nearly the only thing you can touch that President Washington touched hundreds of years ago. It’s possible it’s been replaced as it was refurbished, but the sentiment remains the same.

And with that, let’s all head back to the time machine and get back to present day…

Some of you may know I love having little adventures at antique and thrift stores, which is where more and more of my decor is coming from lately! Back in May, I vlogged one of those outings, and some of the items I purchased that day are being used on our entryway table for the Summer! I figured now would be a good time to show you how my Summer decor came together this year!

Months ago, back in late Winter, I found beautiful Selenite crystals at T.J. Maxx – super great for clearing negative energy! I wanted a place to display them and got a gold pen holder at Target to put them in, along with the wooden fence I found at the dollar spot. The cotton bundle made a comeback, too! The bird on the left was a thrift store find, which I had to have! When I was growing up we used to have a pair of these same exact ones, and since brass is basically the color theme of my house, it fits perfectly!

Back in March, I saw this adorable patriotic colonial house at a thrift store. I didn’t grab it right away, but a month later, it was still there – or so I thought! When I went to purchase it, the owner of the store said when this came in she thought she had already sold it. They actually had sold it and her husband said they received a second one to sell, which is the one I purchased. I’m thinking me and this little house are meant to be!

Most of the books on this shelf were found during the antique trip I vlogged. My eye catches unique and beautiful covers and bindings of books, and I knew I had to display the U.S. Constitution and Other Writings for the Summer. The flag on the cover has an iridescence to it that doesn’t pick up on camera. 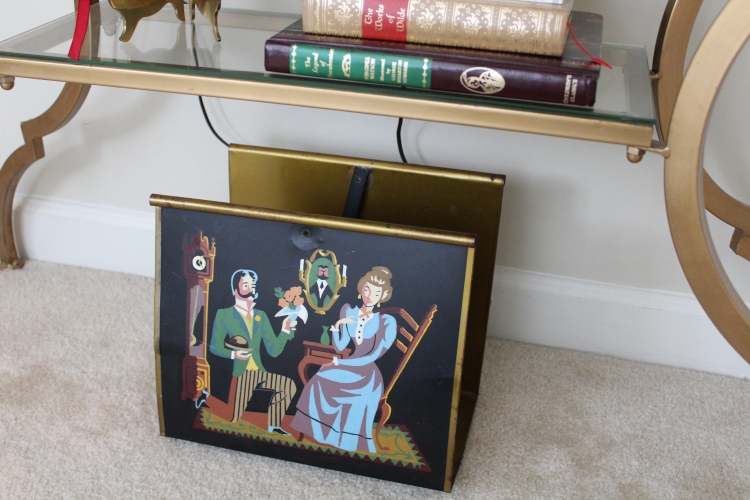 This piece at the bottom, I’m sure is actually for magazines or maybe for wood. But for now, it’s a pretty piece that I found, not surprisingly at this point, at a thrift store! The space under the second shelf always looked a little vacant to me, so for now, this is it’s home.

This American Dragoon was inherited from David’s grandparents and fits perfectly with the theme right now! When I put up the picture this year, I looked at our American Dragoon and thought “He looks like someone, but who?” About a week ago it hit me – Tom Cruise! What do you think? 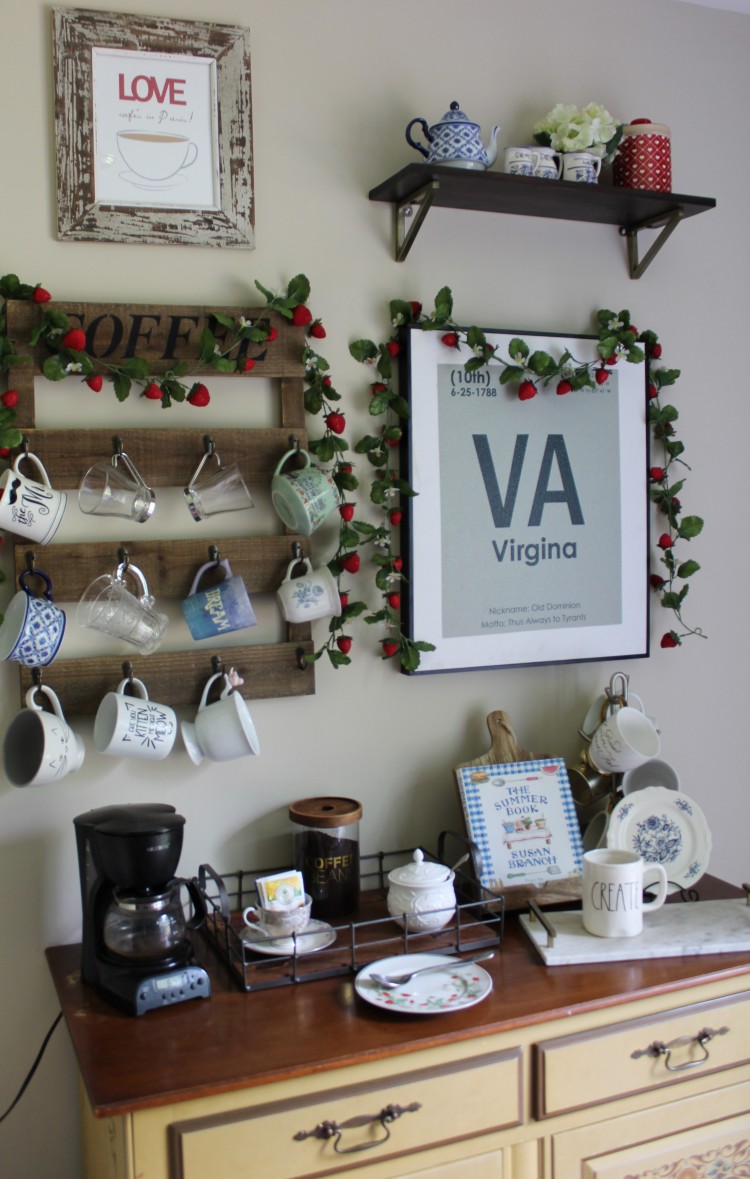 The strawberries have returned to the coffee bar – my Summertime fruit! The coffee bar looks pretty similar as it did last year, only we’ve added a few new things here and there.

I’ve rally taken to displaying books in my home. Like I said earlier in the post, covers have the tendency to draw my eye in and I’ve found a way where I can admire them around the coffee bar. And new to this admiration are beautifully designed plates! This blue and white baby plate has a Momma plate that overlooks our fruit bowl! I loved the design and shape of the plate, and the colors are my idea of perfect Summer decor. 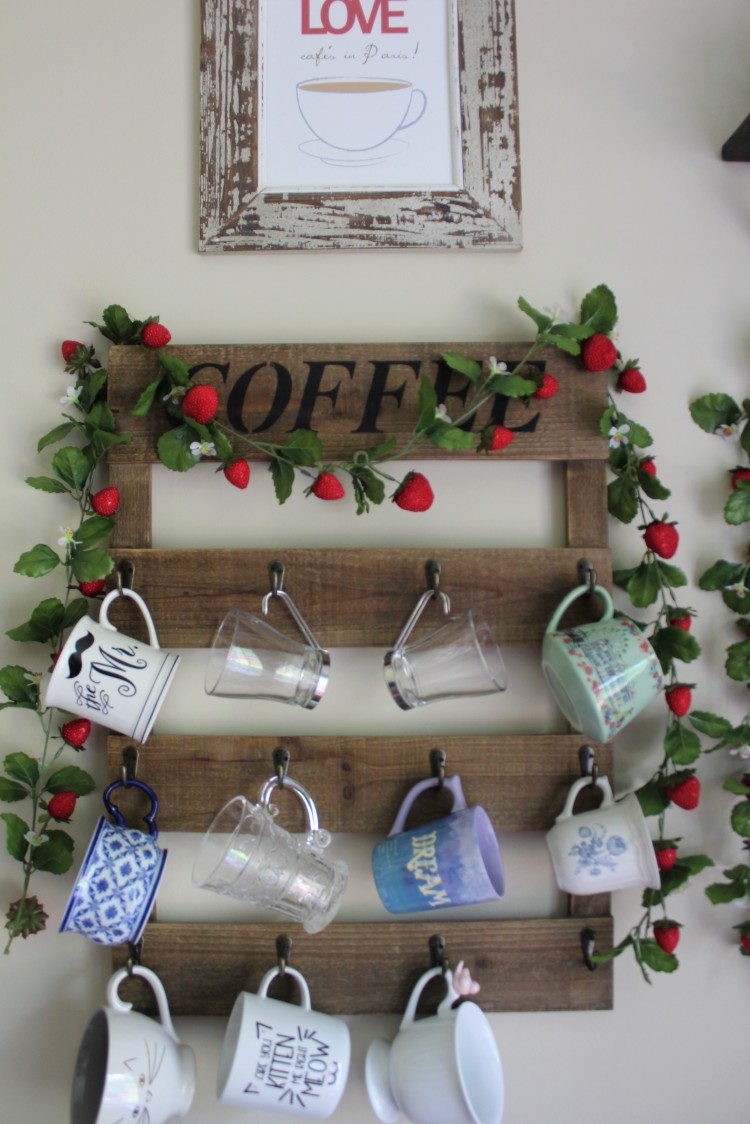 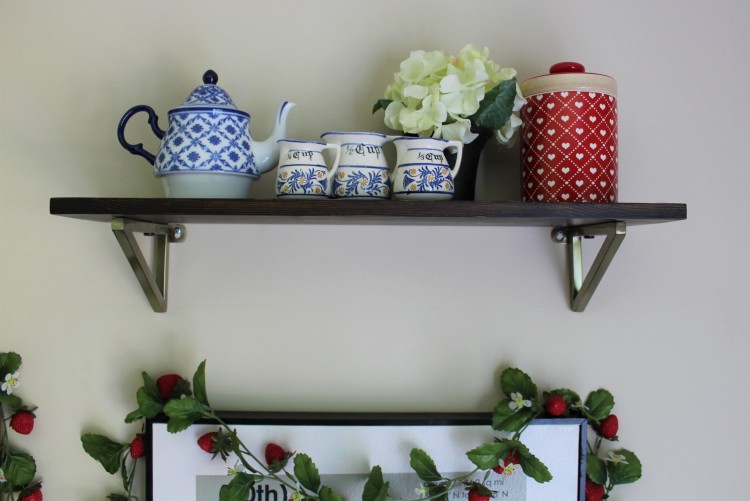 The shelf over the coffee bar is increasingly hard to decorate and I don’t really have an answer why. Ha! I knew I wanted to use the blue and white tea pot that I used last year again, but had no idea what else! Then I found the most adorable measuring cups while thrifting and knew right where their new home would be! I added the red canister with the white hearts and the white flowers sealed the deal!

I hope you all are staying cool in this July heat, friends! I’ve got some fun recipes I hope to get out to you all soon! How have you been enjoying Summer so far?